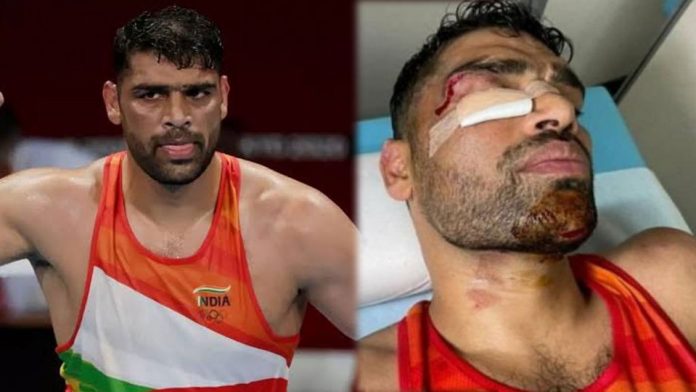 Boxer Satish Kumar is India’s hero in Tokyo despite losing in the quarterfinals. PV in Badminton Singles Sindhu’s second consecutive Olympic medal and the men’s hockey team’s achievement in reaching the semifinals after a four-decade wait. Despite losing 5–0 to Uzbekistan’s world champion Bakhodir Jalolov in the men’s super heavyweight boxing quarterfinals, India’s Satish Kumar is in awe. What is the reason?

Tough like a rock ! He entered into ring with several stitches on face due to injury of last fight . Still faught like a champion against world number one . Wins or defeats don't decide a champion- will and determination do 🥊🥊#SatishKumar pic.twitter.com/15DpdU23Dx

In last day’s pre-quarter match, Satish had 13 stitches on his forehead and chin. Think of the ‘risk’ of competing with face stitches in a competition like boxing. However, Satheesh decided to compete against former world champion Jalolov but continued to struggle despite his opponent’s punching pain tenfold. In the third round, he suffered another injury to his forehead but did not give up.

Despite being advised by his wife and father to retire from the quarterfinals after suffering so many injuries in the last match, the soldier from Bulandshahr, Uttar Pradesh, reached the ring for the biggest fight of his sporting career. Satheesh is the first Indian boxer to qualify for the Olympics in the super weight category. Satheesh also revealed that after the match, everyone congratulated him like a winner.

‘My phone is still ringing. People applaud like I won. I am currently in treatment. There are seven stitches on the chin. Six on the forehead. But my mind told me to fight for the country. If it hadn’t been for the ring I would have had to live with the rest of it for the rest of my life. Now I am happy. I tried my best but I was able to do it ‘- Satheesh said.