Candidates who had applied earlier need not apply again. However, if he so desires, he can rectify the error in his application form. Old and new applicants will be able to modify their own name, parent’s name, post name and other entries in their online form. The amendment can be done between July 30 and August 5. A modification fee of Rs.300 has to be paid.

Earlier more than 13 lakh 49 thousand candidates had applied for the Patwari exam. Now with the opening of the application window for EWS category, the number of candidates will increase further. 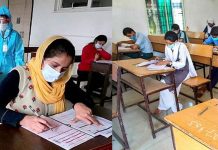