The government can approve SBI’s plan for Yes Bank’s rescue plan. The government may ask SBI to form a consortium to buy a stake in Yes Bank. YES Bank, which was facing a cash crunch, had a loss of Rs 629 crore in the July-September quarter.

SBI chairman refuted
As per the news agency Bloomberg report, State Bank of India has been empowered to elect other members of this consortium. But SBI chairman Rajnish Kumar has denied these reports. Rajneesh Kumar has said that this news is based on mere speculation.

Actually, Yes Bank is going through an economic crisis and the bank is in dire need of funds. There are also regulatory difficulties in front of Yes Bank’s fund raising scheme. At present, it is not clear whether the Reserve Bank of India (RBI) will allow more than 74 percent foreign stake in Yes Bank. But according to the report, RBI wants a lock-in commitment before allowing investment. That is, the lender company will give the loan only for the fixed interest rate and fixed period.

SBI chairman gave a statement in January
Earlier in January, SBI Chairman Rajnish Kumar had said that Yes Bank would not fail. Yes Bank has a balance sheet of $ 40 billion or $ 40 billion and it is very important in the market. He has said that he is confident that a solution will come out of it. The failure of Yes Bank will not be good for the Indian economy. He said this when media reports were speculating that the government could ask SBI to save Yes Bank, which was going through an economic crisis. In December 2019, Rajneesh Kumar said that SBI will do nothing for Yes Bank. 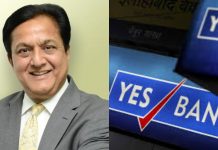 Yes Bank crisis: SBI may pick up to 49% stakes