The shooting of ‘Tiger’ starring Prithviraj starts today. The actor himself shared the information through Facebook. Mass Entertainer Tiger is directed by Shaji Kailas. Director and screenwriter Jinu Abraham are writing Tiger. The tiger is produced by Listin Stephen and Prithviraj Sukumaran under the banner of Magic Frames. Both the films made headlines after Jinu filed a petition in the Ernakulam District Court seeking an injunction restraining the shooting of Suresh Gopi’s film due to similarities between the two films. In August 2020, the court upheld the ban on the 250th film starring Suresh Gopi.

#KADUVA
“They wanted a fight…He gave them a war!”
Rolling from today!

The case is that the script and character of the movie ‘Tiger’ were taken in violation of copyright. The petitioner produced in court the documents showing that the name of the character ‘Kaduvakkunnel Kuruvachan’ was registered under the Copyright Act. The plaintiffs informed the court that all the scenes of the script of ‘Tiger’ have been registered separately, including the name of the character. The documents were also produced in court. The ban was upheld after the court heard arguments from both sides and examined the script.

It was on this day that Lucifer’s shoot began two years ago; Prithviraj reveals 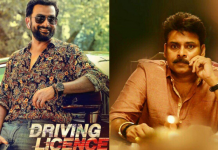