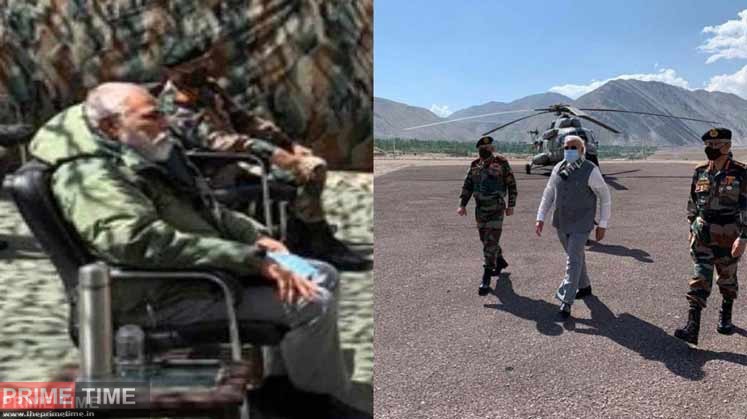 Prime Minister Narendra Modi arrived in Ladakh in the wake of tensions over the border. According to All India Radio. He visited Leh in the morning and arrived in Ladakh soon after. The Prime Minister will be accompanied by Joint Chief of Staff Bipin Rawat. He is currently in a forward military position at Nimu. He is visiting the area near the border. He will directly evaluate the service force. He is in the area where the soldier faces the border. It is located at an altitude of 110000 ft above sea level. According to the national media, he is visiting the Forward Blocks and talking to the soldiers there. He also communicated with wounded soldiers in the Galvan Valley conflict.

He had arrived in Leh this morning. The Prime Minister arrived at the border with Joint Chief of Staff Bipin Rawat. His visit was very unexpected. The purpose of the visit is to build confidence in the troops. He left for Ladakh after visiting Leh. The information comes as the Defense Minister is due to visit today. Preparations were made for it. Reports say that the Defense Minister’s visit has been postponed. There was also speculation as to why he postponed his visit. There was no news that the Prime Minister was going there. He was on a surprise visit this morning. According to information from the Twentyfour Delhi Bureau, he will return to Delhi today after completing his visit.