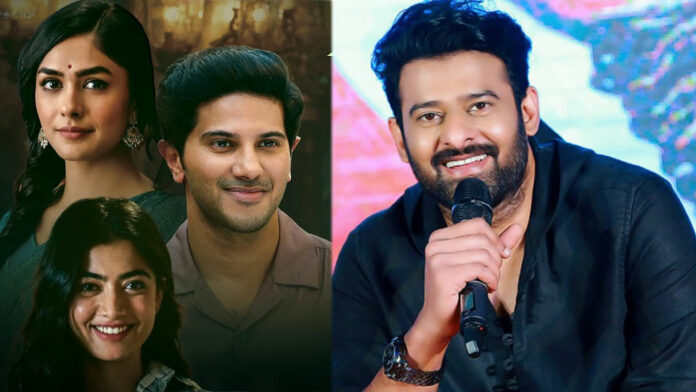 The producers of Sita Ramam, which stars Dulquer Salmaan, Mrunal Thakur, and Rashmika Mandanna, organized a pre-release event on Wednesday. As a special guest, Prabhas lit up the stage and delighted the occasion. On the occasion, he praised the cast—Dulquer Salmaan, Rashmika Mandanna, and director Hanu Raghavapudi—and the movie. The Pushpa actress was his “most wanted”.

Some movies are designed to be seen in theatres, he remarked, urging people to see Sita Ramam there. I watched Sita Ramam’s trailer and other media. For the film’s filming, the producers traveled to Russia and Kashmir. This movie is one that you should see in a theatre. The scale and the amount the producers spent are enormous. Do we cease visiting the temple since we have a pooja room at home, for instance? Theaters serve as our temples as moviegoers. It’s all your fault. Sita Ramam should be seen in a theatre. Rashmika, the most sought-after heroine, is here. We also have a big star cast. We ought to see it in a theatre.

Prabhas was praised by Dulquer Salmaan for attending the ceremony, and he shared some intriguing Project K information. The Malayalam heartthrob added, “I know everybody is dying to know about Project K. I have a good fortune of just peeping into the sets of Project_K and I guarantee you it’s going to change Indian cinema.”

Lieutenant Ram, played by Dulquer Salmaan, and Sita, played by Mrunal Thakur, are forced to part ways since the army officer is stationed in Kashmir during the conflict, which is the subject of the captivating love tale shown in Sita Ramam. The narrator of their love story, Afreen, will be played by Rashmika Mandanna.