In Kerala, an incident has come to light, which will make your hair stand on hearing. Here some people fed a pregnant hungry elephant by putting firecrackers among the pineapples. These firecrackers burst into the mouth of the elephant. This led to the death of the child in his stomach along with the elephant. This inhuman incident was captured by a forest department employee on his camera. Now the photo of this incident has gone viral on social media, after which people are quite angry. There is a demand for severe punishment for the culprits.

On the other hand, Union Environment Minister Prakash Javadekar said in a statement that the environment ministry has taken seriously the death of an elephant in Kerala. A full report is sought on this incident. Strict action will be taken against the culprit.

Humiliation incident
This incident which is a shame on humanity is in Malappuram district of Kerala. Here a pregnant hungry elephant came out of the forest in search of food. She wandered into the village in search of food. In this way, some locals mischief her and feed her with crackers in pineapple. Due to hunger, the elephant ate that pineapple, and in a short time the firecrackers burst. Watch this scene and make any person smile.

The injured elephant fell from the firecrackers. In such a situation, some people informed the forest department. The rescue team arrived after information went with Hathini, but could not be saved. On the way, Hathini died and the child died with him. Seeing this scene, tears were also spilled from the eyes of the Rescue team.

Forest officer Mohan Krishnan, who was part of the rescue team, wrote in a Facebook post expressing his pain, ‘He (Hathini) trusted everyone. She got upset when she ate pineapple and after some time it burst in her stomach. Elephant must have been troubled not for herself, but for her unborn child, which she was about to give birth in the next 18 to 20 months.

Hearing what the doctors said after examining Hathini’s body, anyone’s eyes may get splashed. After examining the doctors, the firecrackers had burst in the mouth of her elephant. Because of this, the lower part of his mouth and tongue were badly burned. In such a situation, she could not eat anything due to pain. The elephant was hungry for a long time, even when the child in the stomach could not find anything, he died in agony. It was a very painful death.

The forest officer said that the investigation has been started by registering an attack case. We want such people to get severe punishment. Action is taken against such people under the law of elephant hunting. However, he said that in such cases, it is difficult to carry out the investigation. Actually, elephants travel many kilometers in a day. In such a situation, it is very difficult to find out where the incident happened and who carried out it. 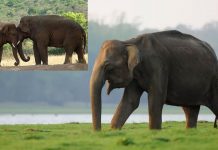 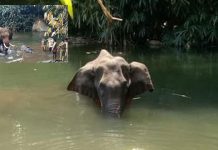 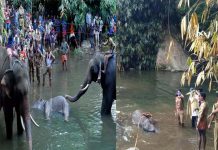 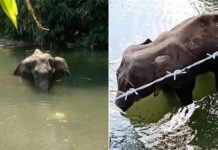