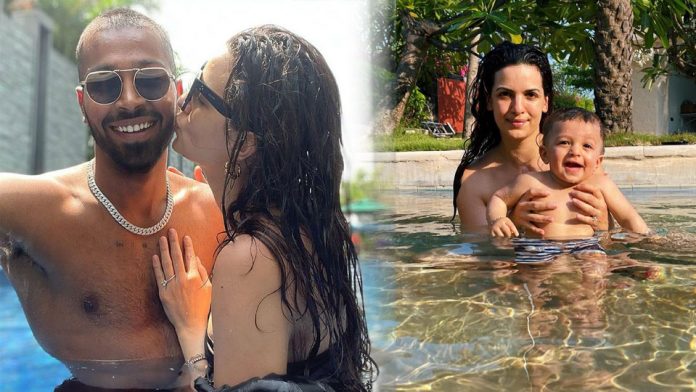 Natasha Stankovic is away from the acting career and is now in the headlines for her personal life and family. Pictures of Natasha with Hardik Pandya and son Agastya go viral on social media. Fans love cute photos of all three and wait for their latest pictures. Natasha also keeps sharing fantastic moments with her son with the fans. In this episode, Natasha has shared the latest picture while enjoying pool time with her son Agastya. This picture of Natasha and Agastya from the swimming pool is telling their fun-filled moments. Little Agastya is seen openly expressing her happiness in the lap of mother Natasha. At the same time, Natasha is also smiling and posing with her son on camera. With this picture of her, Natasha expresses her love with the Heart Emoji.

Fans including Hardik Pandya have reacted to this picture of Natasha. Hardik gave his love to both the mother-son with the Heart Emoji. At the same time, the fans have also described this picture of Natasha and Agastya as the most beautiful. This photo of both of them is so cute that it has become viral on the internet. So far more than 50 lakh likes have been received on this. From this, the popularity of Natasha and Agastya can be estimated. Natasha has also shared a wonderful picture with her son on her Insta Story. In the picture, Agastya is seen in the lap of his mother Natasha. This photo of both the mother and son shows the moments filled with Mamta. Natasha wrote in the caption- ‘My heart is a stereo, which beats for you, so listen to it closely’.