MP Board 10th Result 2020: Madhya Pradesh Board of Secondary Education (MP Board) has given important information regarding the release of the 10th and 12th results. Director of Secondary Education Board Hemant Sharma has told a local media that MP Board 10th results will be released in the first week of July. Results can be issued anytime within the next 10 days. He told that the result has been prepared on the basis of the number of papers that have been done in the 10th examination. No student will be failed in the paper which has not been cleared for examination. Also, the results of the 12th will be released in the third week of July.

The MP board had earlier said that the results of the 10th will be released by the end of June but these results will now be released in the first week of July.

Therefore, the result of the 10th will be released first-
The board said that some of the exams of the 10th were held in March and the remaining examinations were canceled. Hence evaluation of answer books of 10th examinations has been completed on time. But the remaining exams of class 12 lasted from 9 June to 16 June. In such a situation, the work of checking 12th copies is going on. This is the reason that the 10th result is being released this time before the 12th.

In the M Board 12th exams, 20 lakh answer sheets have been installed. They are under evaluation. It is expected that their evaluation work will be completed in the next 10 days and the results will be released as soon as possible after July 15. Let us tell you that about 19 lakh students had appeared in the 10th and 12th board exams of 2020.

Apart from mpbse.nic.in, students will be able to check the results on www.livehindustan.com on the announcement of the result. When the result of MP 10th and 12th is released, an alert will be sent on your mobile by Live Hindustan, on which you can check the result by clicking directly. But for this, you have to register by clicking on the link given below. 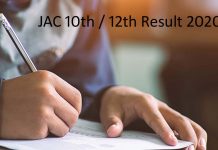