The country’s largest automobile manufacturer Maruti Suzuki has launched its new micro-SUV hatchback S-Presso (S-Presso) (Maruti Suzuki S-Presso). Starting price of Maruti S Presso starts at Rs 3.69 lakh. The price of the high version is up to Rs 4.91 lakh. It has just been launched in the petrol engine market. The company has launched it in two transmissions and four variants (Standard, LXI, VXI and VXI +). It will be available in 6 colors. This car has been produced on Suzuki’s Heartect platform. The car has more than 10 safety features. The concept of S-Presso was introduced at the 2018 Auto Expo under the name Maruti Future-S.

The Maruti S-presso has a 1.0 3-cylinder BS6 petrol engine. It will get 5-speed manual and AMT gearbox options with the engine. Which generates 68 PS power and 90 Nm of torque. The company claims that the S-Preso will give a mileage of 21.7 kmpl in one liter of petrol. Also, an automatic manual transmission unit has been given in some of its variants .

As standard safety features, it has EBD with ABS, driver-side airbags, reverse parking sensor, speed alert system and driver and co-driver seat belt reminders. It will get features like touchscreen infotainment system and central instrument cluster (with orange backlighting). 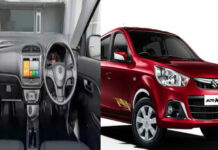