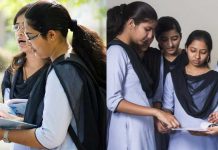 Plus One has 20 per cent extra seats in seven districts

TN Board 11th Plus One Results 2020: Tamil Nadu Plus One results released