The mortar shells found after the ceasefire violation by Pakistan in Navwa village of Uri sector in Jammu and Kashmir were destroyed by the Indian Army bomb squad. A video has surfaced in which the bomb squad is seen destroying the mortar. Let us tell you that on Tuesday, Pakistan fired at the Line of Control (LoC) in Poonch district of Jammu and Kashmir and violated the ceasefire. The army gave information about this.

To this, Colonel Devendra Anand said, “Pakistan started violating the ceasefire unprovoked and opened fire with small arms and fired guns near the Line of Control in Mankot sector of Poonch district at around 6.30 am today.” The Indian Army is also taking a befitting retaliation. ”

#WATCH Jammu and Kashmir: Indian Army Bomb Squad destroys mortar shells of Pakistan that were found after the recent ceasefire violation by Pakistan at Navva village in Uri sector. pic.twitter.com/4v4k6BDC4H

This is the second ceasefire violation by Pakistan in less than 12 hours. Yesterday (Monday) around 7.45 pm, Pakistan had opened heavy fire with Motrar for violating the ceasefire in Khari Karmara sector of Poonch district.

Significantly, there is now firing from both sides in Mankot sector. In the midst of such firing, the locals are forced to remain imprisoned inside their homes in fear. Bullets fired across the LoC often cause civilian casualties and damage their homes and agricultural area 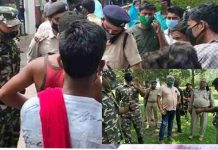