BJP’s Nashik Central candidate Devyani Suhas Farande and Pappu Sheikh gave the nod. On October 7, between Pavane Eleven and Pavane Bara, they were charged with violating the Code of Conduct by propagating at the Rahunuma Urdu School in Wadala Road without the permission of a competent officer.

The complaint was filed by Danish Akram Sheikh complaining of going to the school rally, according to a letter issued by the election decision officials of the Central Nashik Vidhan Sabha constituency.
Further investigation into this. SI Jadhav is doing. 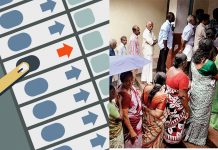 Voter list on 17; Local government and preparations for speeding up local elections