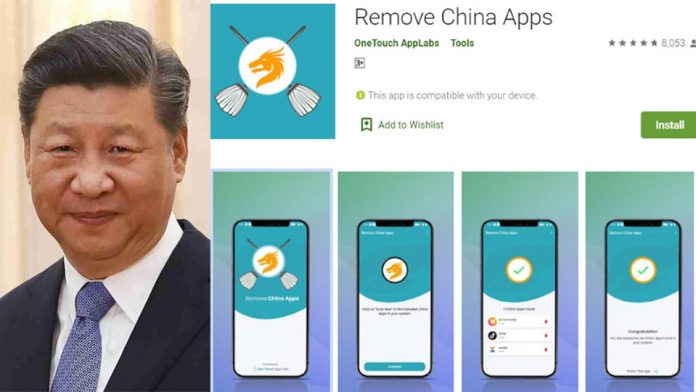 An Indian-made app is ready to challenge China, which is waging a war against India, India-China border dispute is intensifying. A startup company based in Jaipur has launched ‘Remov China App’

Over two lakh downloads were made in two weeks. It was developed by the company One Touch App Labs. Downloading WhatsApp will detect and remove Chinese-made apps on your phone. Indian entrepreneur Sonam Wangchuk last week called for a boycott of Chinese products. Aamir Khan’s character, Funsuk Wangdu, was inspired by Sonam Wangchuk in the Bollywood film ‘Three Idiots’. Following Wangchuk’s call, actor and model Milind Soman announced he was leaving Tiktok.

‘Our soldiers are fighting on the border. At the same time we are buying Chinese hardware. Using software such as TikTok. Through the billions of rupees we trade for them, they are mobilizing the soldiers to fight against us, ”Wangchuk said. In China, after Covid, factories were locked up and exports stopped. Unemployment is on the rise. If 130 crore people in India decide to give up Chinese products, it will be a global phenomenon. That is good for our industry, ”Wangchuk said.