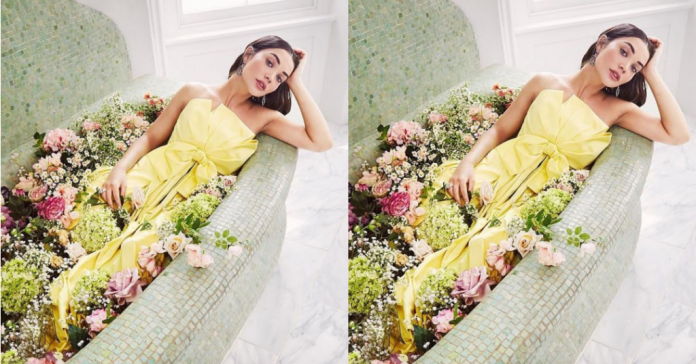 Actress Amy Jackson shared a stunning picture of  flower bath in her new post. The Actress took to Instagram, to she shared a picture of herself dressed in a stunning yellow dress, posing in a bathtub filled with flowers.
“Taking lockdown flower baths to the next level..” was the caption written by Amy Jackson

Amy Jackson  had recently shared a photograph of herself lying next to her son Andreas, who was born to Amy and her fiance George Panayiotou last year.

Amy made her acting debut with the 2010 Tamil movie “Madrasapattinam” and has featured in several Telugu, Hindi and Kannada films apart from Tamil films.Her last big release was the Rajinikanth-starrer “2.0” in 2018, which was released in Tamil, Hindi and Telugu versions.