The Tik Tok video of Amrutha Saju, who resembled Aishwarya Rai Bachchan, went viral on social media. This is Junior Aishwarya Rai from Thodupuzha. Amrutha will star in Sunil Kariyattukara’s movie ‘Picasso’. Amrutha has also acted in several ad films. His face has been seen in a few films.

Amrutha says, When I woke up one day, the photo was in The Times of India. After that, it’s a good rush. Even worse is that it seems to be just sitting at home with a tik tok. I feel bad about losing privacy. The video was previously made from a comfort zone. See very few people. But now a lot of people are watching the video. There have also been critics. Amrutha says that it is. 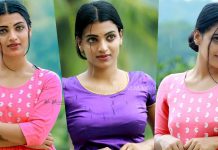